Hi yall!! It has been a while.  I thought I would get back on track and then quarantine happened and well, I was just not motivated to blog.  There is a lot going on in our world right now and I just needed the time and space to process it all.  I have days where I am sad, even anger at the world.  But, I have also found a lot of happiness during this time and today, I will share that with you.

I have another post coming with all that has been going on around here the past few months, but this update just deserved its own post.

A few weeks into quarantine, I brought up the idea of adding to our family to my husband… another dog LOL not a baby.  And he agreed that now was the best time, if he must give in to my constant BEGGING for one more pup.  Honestly though, if it weren’t for my husband, I’d probably never stop bringing home doggies. 🙂

We knew we were going to adopt a doggie (all of our pups have been rescues and I love the idea of saving a pup, while making room for another one in need at the shelter).  My husband has been wanting a lab/retriever puppy for a while now and I wanted a grandma/senior chihuahua…. basically we both wanted the opposite dog. LOL.  So we settled on a puppy chihuahua. HA!  It kinda cracks me up to think about.  We searched and searched the shelters (online) and every dog we called about was already adopted (one benefit of the quarantine was that so many animals were rescued and adopted).  We finally got a message that one pup we inquired about was still available for adoption.  His name was Moshi Moshi.

The next day we went to meet him and I about died.  He was 3.7 lbs.  We went home to sleep on it, but called the next day to tell them we would like to adopt him. 🙂

He is a ball of energy, but the good kind.  He is the cutest little thing.  He loved sleeping in baseball caps and my husband often put him in the hood of his sweatshirt or the pocket of his sweatshirt and he loved it. 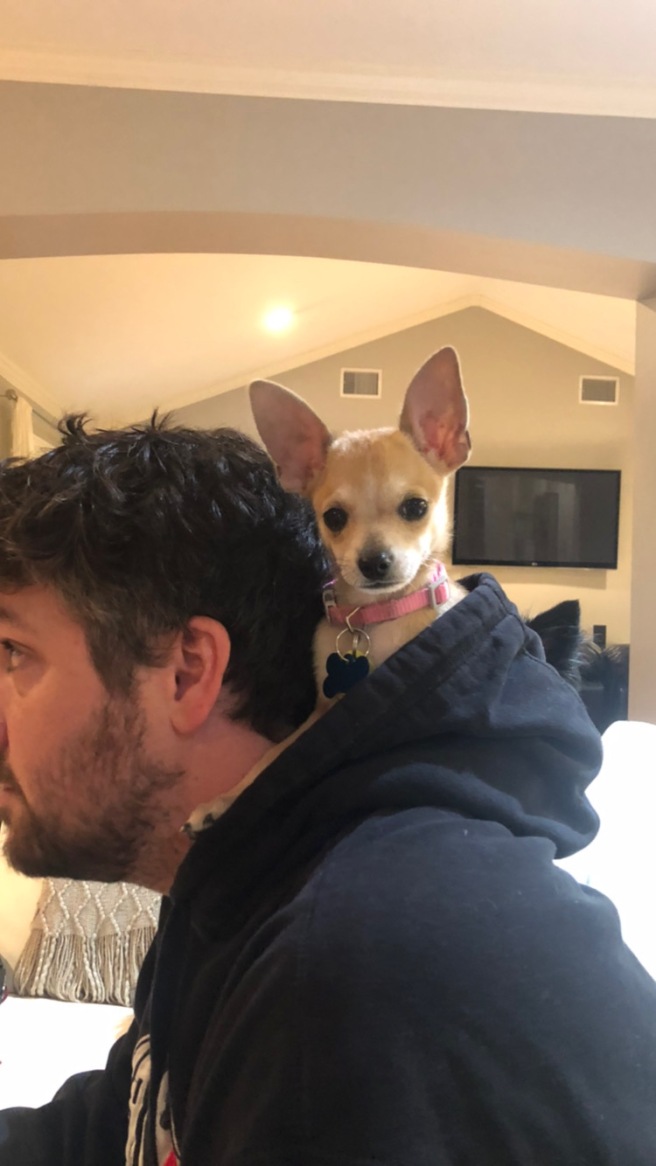 He loves ALL toys and will play fetch forever. 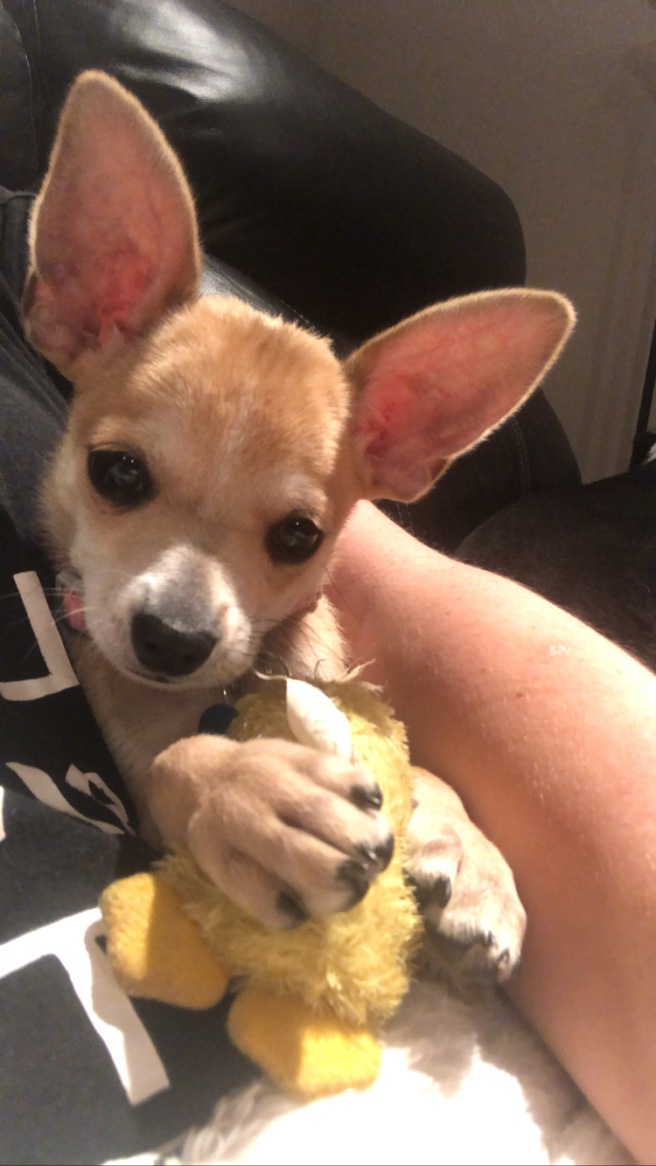 He has that chihuahua bark, but isn’t super yippy.  He definitely is mixed with something else though because I have never seen a chihuahua love toys like he does.  When we first got him, he just loved to nuzzle up under my chin. The sweetest.

His ears are the cutest thing… way too big for him. 🙂

He is very spunky and very food motivated… like he loves watermelon and mango LOL.  He will eat anything and gets SO SO SO excited for meal time.  Our other two pups were big grazers and would just snack throughout the day, but they have quickly learned they better eat at mealtime because little man will dive in if they step one foot away from their bowls. 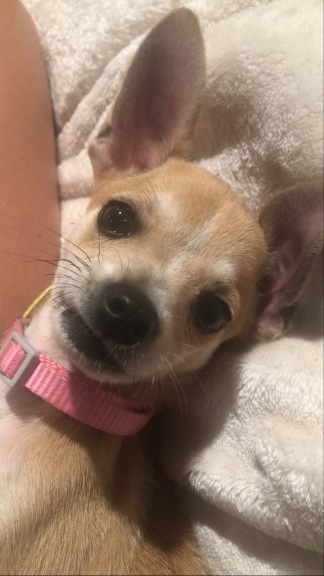 He loves car rides just like my other pups.  He loves to look around then take a nice long nap.

Oh, I should mention… we renamed him Tito and the name just fits him so well.  He also goes by Teeter, Teets, Teterson, and Teety. Our pups have a lot of nicknames. 🙂 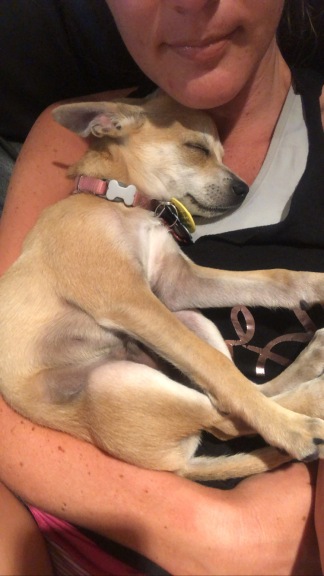 It has been a fun months of a lot of firsts.  He got to take his first bike ride, try many licks of new foods, walks in new parks, and the poor baby got his first surgery – just a neuter – so no big deal.  He was back to his spunky self the next day. 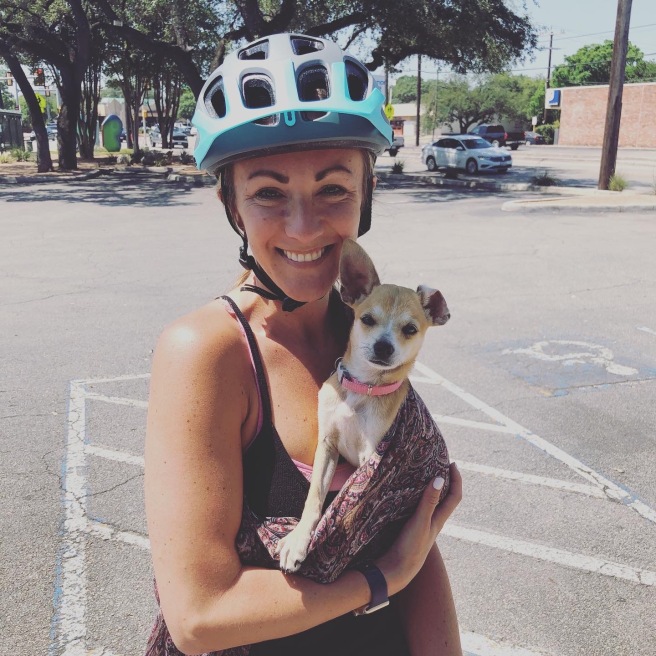 He sleeps in bed with us alongside the other two pups and does great.  He slept in a crate for the first few weeks but picked up on potty training really quickly and sleeps through the night now.  He also got to go on his first trip to the lake and on the boat… he loved it!

So I won’t lie… my other two pups were not thrilled when we brought home the puppy, but that has changed for the most part.  Riley however does not acknowledge the puppy. LOL. He sits on top of him and just pretends (well he is partially blind) that he can’t see him.  Callie did NOT like Tito for the first few weeks but has done a total 180.  She and Tito play every day all day long and it is sooo darn cute.  And that is saying a LOT because Callie doesn’t really like other dogs… she’s not aggressive, she just ignores them.  I wake up every morning to Callie and Tito playing and it goes on for hours.  Needless to say, Tito has been very very good for our shy Callie girl. :). It makes my heart really happy.

Ok, I will stop rambling on about my new little baby love, but just had to share with you guys.  I really hope you are all well and staying sane in quarantine.  It is a tough time for all of us and the world in general and I am here for you.  I will be back to share more love and happiness soon because lord knows we could all use a little more. 🙂